When is a Joke Funny?

“The best thing in the world is writing a joke, having an audience get it. I will never grow tired of that. It’s magical,” says Mel Brooks, one of several dozen comedy writers interviewed in the new book “Poking a Dead Frog.” The title comes from an observation by E.B. White that analyzing humor is like dissecting a frog to see what makes it live: It can suck the life out of the subject. 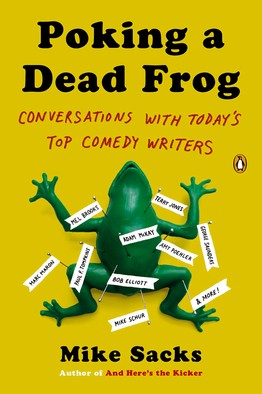 “You can really ruin it,” says author Mike Sacks, a writer at Vanity Fair who before “Dead Frog” published a prior compilation, “And Here’s the Kicker.” His conversations with humorists poke at some fundamental concepts of comedy without chloroforming any frogs. More revealingly, the book examines what kind of person comes to make a living putting funny words on paper. “I’m just as interested in the people, where they come from, how it influenced their humor,” Mr. Sacks says.

Roz Chast, the New Yorker cartoonist and author of the best seller “Can’t We Talk About Something More Pleasant?” was raised in Brooklyn with older parents who disliked pop culture. She loved reading MAD magazine even though it wasn’t allowed in the house, and, she says, “I was fascinated with medical oddities and bizarre diseases.” She grew up to create cartoons like “Adult Attention Deficit Disorders” (which included “Driving Direction Deafness”).

Carol Kolb, a writer and editor for the satirical newspaper the Onion, is from a small town in Wisconsin. In 2001, the Onion became essentially the first comedy outlet to do anything concerning the Sept. 11 attacks. She wrote the headline “Not Knowing What Else To Do, Woman Bakes American-Flag Cake.” A writer less connected to the heartland might never have gone in that direction.

Writers who don’t perform or direct movies like Mr. Brooks often aren’t famous, and they often view the world differently than those more comfortable showing off in public.

“Writers tend to write ordinary people in weird situations. Performers tend to put weird people in ordinary situations,” says longtime “Saturday Night Live” writer James Downey in the book. Writers also obsess over originality, whereas performers may have no problems repeating jokes or characters. “Writers tend to be very hesitant to repeat characters. We feel that it’s somehow unethical, that it’s cheating,” he says. “We can tie ourselves in knots worrying ‘Is this too similar to that other thing?”

The book includes interviews with writers who have worked in just about every medium where you can get a laugh: movies, TV, print, even old-time radio. A common thread is a sort of hopeful cynicism.

“I’ll probably look back and wish that I didn’t always look on the dark side of everything. But how can you not?” Ms. Chast says. “You could die at any time, for any reason. You’re walking under an air conditioner and ka-boom! My parents actually knew someone who was killed by a falling flower pot.” 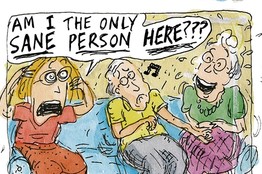 Terry Jones of “Monty Python” says, “the BBC hated the show—until they were told it was funny.” Bruce Jay Friedman, the novelist and scriptwriter, advises aspiring TV writers: “Include the line ‘We have to talk.’ Writers are brought in and paid a fortune for their ability—and willingness—to write that line.” Mr. Brooks talks about his battles trying to mix intellectual and lowbrow humor in movies like “Blazing Saddles.” “The executives didn’t want the farting scene,” he says.

Peter Mehlman says he never expected that the “yada yada yada” and “double dip” lines he wrote into ‘Seinfeld’ would become part of popular culture.

“I was at a party and somebody flipped out because someone else ‘double-dipped’ a chip,” he says. “I had to make up the phrase….I never consciously thought, ‘Oh, my, I can actually add to the lexicon.’ ”

The collected minds don’t crack the code for what makes something funny. But there are glimpses into the process. One comes via a list of rejected headlines from the Onion that editor Will Tracy annotates. Someone proposed the headline “Only Way to Prevent Gorilla Attacks is Bigger Gorillas Everywhere, says NRA Head.” The editors liked the idea but felt the wording was convoluted. They came up with a sharpened revision: “Gorilla Sales Skyrocket after Latest Gorilla Attack.”